The Lamborghini LM002 the off-road vehicle “on fire”

There were no in between with this Lambo that someone nicknamed “Lambo Rambo”; due to its “toughness”

Perhaps you have been lucky enough to see it darting through the streets in the mid 80s, with its proud and defined lines. There were no in between with this Lambo that someone nicknamed "Lambo Rambo" due to its "toughness". The concept was certainly the typical "love it or leave it". Such a creature could only come out of the Lamborghini factories: we are talking about the LM 002, forerunner of the SUV concept, when this acronym did not yet exist. Despite its size, it was extremely agile: with a weight of 2.5 tons and 450 HP, its 5167 cc V12 engine - derived from the Countach Quattrovalvole - still propelled it to a top speed of 220km/h, crowning it as the fastest off-roader on the planet. Over the top was the right way to define it.

The LM002 project was conceived at the turn of the 70s as a basis for the development of a military vehicle, the Cheetah, but was suspended until 1981 when Giulio Alfieri, Lamborghini staff engineer, recovered it. It was an innovative concept with the engine in the rear position, followed by the LMA prototype, on which the propulsion unit was placed in the front position. The chassis was made of aluminium and fibreglass, the Scorpion tyres were suitable for both the road and the desert sands, with customised interiors made to customer specifications, such as four-wheel drive provided as an option.

The model was introduced at the Brussels Motor Show in 1986 and, even if only a few hundred units were made, it is still destined to garner the admiration of many enthusiasts.

In this story of the month, together with the legendary LAMBO, the star we would like to talk about is: SMOBIPLUS, which is rightfully one of WORKY’s best sellers.

This renewed version of the welding fume suction filter unit - officially introduced internationally at Autopromotec 2019 (although already introduced a few months earlier in the wide range of WORKY solutions) is the result of WORKY's pursuit for more than just new products in Research and Development, also aimed at the evolution of products already in the range.

The SMOBIPLUS filter battery is well protected - in its special support guides - by the sturdy structure made of sheet steel and with well-defined lines, which also houses the 1.5 HP fan in the front. The horizontal layout of the filtering unit body ensures stability and agility of positioning, making it a robust and functional unit at the same time.

The fan housing in correspondence with the connection flange to the articulated arm optimises extraction power: depending on the filter set-up, the flow rate can reach 1500 m3/h. Two of SMOBIPLUS’ 4 wheels are castor wheels, and of these two, one is also braking. Thanks to the SMOBIPLUS-KE kit, which can be supplied as an option, the filtered air exhaust point can be moved by channelling the air through a 10 m flexible pipe.

The technical characteristics of the SMOBIPLUS series portable welding fume extraction unit differ by type of filtration and quantity of activated carbon, according to the different needs of use.

For everything you need to know about our welding fume extraction units, please download our catalogue or contact us directly. 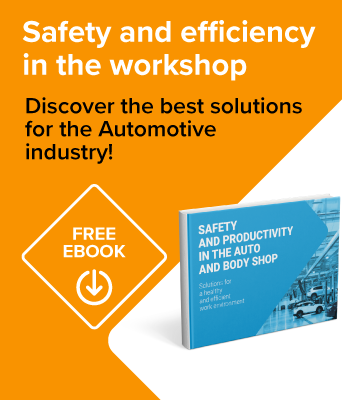 see all topics
MOST READ ARTICLES